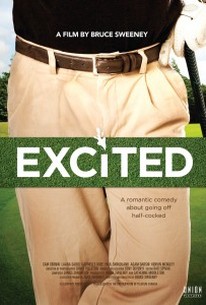 A thirty-something single man is afraid his latest romance will be over before it starts in this independent comedy from writer and director Bruce Sweeney. Eight years after his marriage ended in divorce, Kevin (Cam Cronin) is doing well in his career as the owner of a successful golf course, but his personal life is another matter altogether. Kevin hasn't been on a date since he became single again, and his overbearing mother (Gabrielle Rose) makes no secret of her concern that she'll never become a grandmother. Kevin's slacker brother Randy (Paul Skrudland) decides to step in and help, setting Kevin up on a date with Hayaam (Laara Sadiq). To Kevin's surprise, Hayaam turns out to be attractive and fun to be with, and they quickly bond with one another. However, things become problematic when they move their relationship to the next level -- Kevin's nerves cause him to finish far too quickly in the bedroom, and though Hayaam wants to help, she's only willing to deal with his problem for so long. And as Kevin struggles to find a solution to his sexual problem, his mother makes it clear that she doesn't approve of him dating a woman of Pakistani heritage. Excited was an official selection at the 2009 Toronto International Film Festival.

There are no featured audience reviews for Excited at this time.