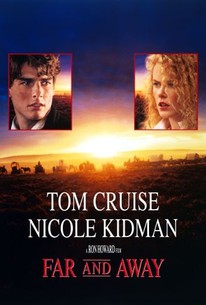 Handsome and simplistic, Far and Away has the beauty of an American epic without the breadth.

Far and Away Ratings & Reviews Explanation

Far and Away Videos

3:03
Far and Away: Official Clip - Devil in the Stable

3:00
Far and Away: Official Clip - Fighting for Us

3:00
Far and Away: Official Clip - Staking Their Claim

3:00
Far and Away: Official Clip - The Oklahoma Land Rush

3:00
Far and Away: Official Clip - Scrapping

Far and Away Photos

In this epic Ron Howard film, Joseph Donelly (Tom Cruise) is an impoverished 19th-century Irish tenant farmer who has recently lost both his father and his home to the agents of his unscrupulous landlord. On a mission to avenge his family's injustice at the hands of the ruthless land baron Joseph meets the landlord's daughter and the two run off to America together where the girl expects to claim a piece of land for herself in the Oklahoma Land Rush. After she is robbed on the boat that carries them to America, they arrive with nary a penny and struggle just to keep their heads above water in the slums of Boston. After a series of serious set-backs they do eventually work their way out West, where Joseph must fight to realize his dream and claim a piece of the American Dream for himself -- and where they finally acknowledge their love for each other. Shot in wide-screen Panavision, the movie was filmed on-location in Ireland and Montana.

Cynthia Haffield
as Girl in Bar

Critic Reviews for Far and Away

Audience Reviews for Far and Away

Far and Away Quotes