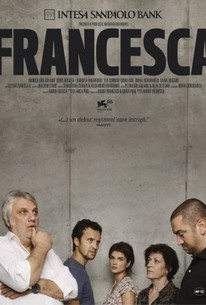 In this dark-hued comedy, Francesca (Monica Birladeanu) is a thirty-something Romanian schoolteacher with an idealistic streak who wants to relocate to Europe some day. Francesca is well aware of the low opinion many Italians have of Romanians, and her great dream is to settle in Rome and open a school to uplift the image of her people. In the meantime, she keeps asking her family what they think about her plan (for the most part, they think it's a bad idea) and wonders what to do about her boyfriend Mita (Dorian Boguta), who seems to have lost interest in her. Francesca believes her chance to make a big change may have finally come when she's introduced to Pandele (Ion Sapdaru), an illegal entrepreneur who says he can get her work as a caregiver for an elderly man in Milan; she jumps at the chance, even though her father Ion (Teodor Corban) thinks the lack of firm details sounds rather suspicious. Mita promises to meet Francesca in Italy as soon as he can raise the money, but that takes much longer than expected as Francesca finds herself stranded in a strange land. Francesca was the first directorial assignment for successful producer Bobby Paunescu.

There are no featured audience reviews for Francesca at this time.