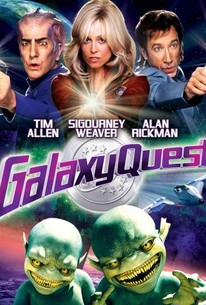 Intelligent and humorous satire with an excellent cast -- no previous Trekkie knowledge needed to enjoy this one.

For four years, the courageous crew of the NSEA Protector donned their uniforms and set out on thrilling and often dangerous missions in space - then their series was cancelled. Twenty years later, the five stars of the classic '70s series "Galaxy Quest" are still in costume, making appearances at sci-fi conventions for legions of die-hard fans - but some of those fans are a little more far out than the actors could have ever imagined. A group of aliens who have mistaken intercepted television transmissions for "historical documents" arrive at a convention and whisk "Commander Peter Quincy Taggart" and his crew into space to help them in their all-too-real war against a deadly adversary. With no script, no director and no clue about real space travel, the actors have to turn in the performances of their lives to become the heroes the aliens believe them to be.

Morgan Rusler
as Fan No. 2

Gregg Binkley
as Fan No. 3

Brandon Michael Depaul
as Fan No. 4

Greg Colbrook
as Fan No. 6

John Patrick White
as Teen in the Bathroom No. 1

Todd Giebenhain
as Teen in the Bathroom No. 2

Matt Winston
as Technician No. 1

Brandon Keener
as Technician No. 2

Lawrence Richards
as Thermian Greeter No. 1

Mic Tomasi
as Thermian Greeter No. 2
View All

Free Movies Online: 200 Fresh Movies to Watch Online For Free
Galaxy Quest Is Still the Best Movie about Fandom
The 21 Most Memorable Movie Lines of the Last 21 Years
View All