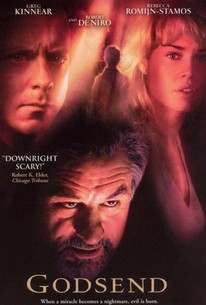 Paul and Jessie Duncan have lost their beloved eight year-old son Adam in a tragic accident. As they are arranging for his burial, Dr. Richard Wells, approaches with the incredible offer to clone Adam, essentially bringing back their boy and reuniting their broken family. Despite the many legal, ethical and moral issues raised by the offer, the grieving couple, after much soul searching, accept Wells' proposal, placing them in a sort of Faustian pact with the doctor. But to the Duncans, the secrecy Wells demands is insignificant compared to the hope that their son will again have the chance to grow up. The couple moves to the small town of Riverton, home of Wells' impressive Godsend Fertility Clinic, where the stem cells carrying Adam's DNA are implanted in Jessie's womb and where Adam will be born and raised for the second time. Adam's new life follows a comfortable and, to Paul and Jessie, predictable pattern, until he reaches his eighth birthday and virtually begins living on borrowed time. The parents have placed their complete trust in Dr. Wells, but now questions are raised and they start to wonder: just how far did he really go? Did he settle for simply playing God? Once they unravel the horrific truth, Paul and Jessie Duncan will have to come to terms with what they have done, and what has been done to their family.

Sava Drayton
as Thug No. 2