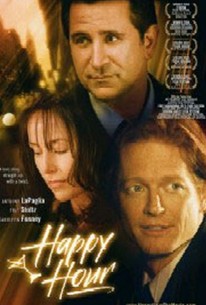 An alcoholic must choose between love, life, and the bottle in this independent comedy drama. Tulley (Anthony LaPaglia) is a self-described "drinker with a writing problem," who after publishing a handful of well-respected short stories, began work on a novel. The novel, however, turned out to be a harder task than Tulley imagined, and he opted to take a job as an advertising copywriter, where he earns a good living but makes scant use of his talent. Tulley has also fallen into a habit of heavy drinking, as his best friend, Levine (Eric Stoltz), looks on with bemused concern. One night at a bar, Tulley meets Natalie (Caroleen Feeney), a teacher who doesn't much care for children, and what starts as a one-night stand turns into a love affair. As Natalie gets to know Tulley better, she discovers the talent lurking behind his alcoholic defenses, and encourages him to devote himself to literature again. However, as they fall deeper in love, Tulley discovers he has a larger problem than his novel to deal with -- he's been diagnosed with cirrhosis of the liver, and won't have long to live if he can't change his ways.

Larissa Thurston
as Woman in Bar

Michelle Maryk
as Woman in Park

Bob O'Brien
as Himself

Jack Newfield
as Himself

Pete Hamill
as Himself

Steve Dunleavy
as Himself
View All

There are no featured audience reviews for Happy Hour at this time.