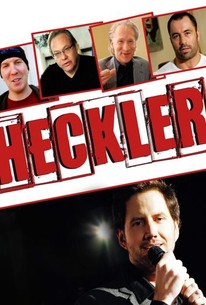 Nearly anyone who performs in public on a regular basis is familiar with the notion of the audience member who makes their opinions loudly and clearly known during the show, and like most comedians Jamie Kennedy has dealt with his fair share of hecklers over the course of his career. However, when Kennedy moved from stand-up comic to actor, he encountered a new breed of heckler -- the on-line film critic who posts angry rants on the internet, taking Kennedy to task for nearly every aspect of such critically drubbed movies as Son Of The Mask and Malibu's Most Wanted. Kennedy teamed up with director Michael Addis to make the documentary Heckler, which explores the increasingly combative relationship between artists and their audience. Heckler features interviews with a number of comics and musicians discussing their experiences with loud-mouthed spectators (including Bill Maher, David Cross, Louie Anderson, Rob Zombie, Joe Rogan and David Allen Grier), but Kennedy goes a step further, confronting a number of the writers who've bad-mouthed his work and questioning their role in the creative process. Kennedy and Addis also talk with filmmaker Uwe Boll, who went so far as to challenge his critics to a boxing match. Heckler received its world premiere at the 2007 Tribeca Film Festival.