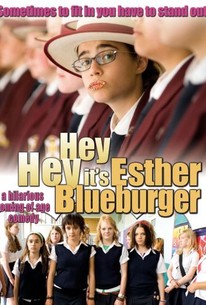 Two girls swap schools and experience some unexpected ups and downs in this coming-of-age comedy from Australia. Thirteen-year-old Esther Blueburger (Danielle Catanzariti) is a geeky misfit attending an upscale private school for girls, where she blends with the rest of the students like oil and water. Esther's parents, Grace (Essie Davis) and Osmond (Russell Dykstra), have little concern for or understanding of her problems, and they're far more interested in her twin brother, Jacob (Christian Byers). After being humiliated at her bat mitzvah, Esther wanders off and meets Sunni (Keisha Castle-Hughes), a 17-year-old high school student with a spunky attitude and little concern about what others think of her, an outlook encouraged by her mother, Mary (Toni Collette), who makes a living as an exotic dancer. When Sunni discovers how unhappy Esther is at her school, she hatches a plan for Esther to attend her public school by pretending to be a Swedish exchange student. This goes over just fine at first, and Esther is welcomed warmly by her new classmates, but she discovers hanging out with an older crowd forces her to face some important new decisions, and she attracts the attentions of a boy who wants a more mature relationship than Esther can handle. Hey, Hey, It's Esther Blueburger was the first feature film from writer and director Cathy Randall.

Cassandra Jinman
as The Slug

Joey Kennedy
as Policewoman
View All