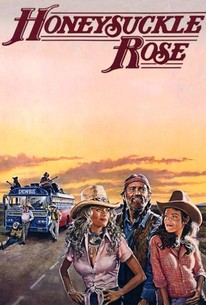 After displaying his easygoing charm in a number of television appearances and a showy supporting role in The Electric Horseman, Willie Nelson scored his first leading role in this romantic comedy-drama in which he (appropriately enough) plays a musician. Buck Bonham (Nelson) is a country singer/songwriter with a loyal following in his native Texas and the neighboring Western states. However, Buck hasn't yet had the hit record that would make him a star nationwide; in the meantime, Buck and his band keep up a busy tour schedule, much to the annoyance of his wife, Viv (Dyan Cannon), and son, Jamie (Joey Floyd), who would like to see Buck at home every once in a while. As Buck wonders if he should press on with his musical career or call it quits, his close friend and longtime guitarist Garland Ramsey (Slim Pickens) announces he's retiring, and suggests a good replacement -- his daughter, Lily (Amy Irving). Lily had a crush on Buck as a child, and now as a full-grown and very beautiful woman, her infatuation has only increased with time. Consequently, Buck must choose between Viv and Lily as well as his home and his career. Honeysuckle Rose was written specifically for Nelson, and his character bears more than a passing similarity to Willie and his life before the album Red Headed Stranger made him a star; the film also earned Nelson an Academy Award nomination for the film's theme song, "On the Road Again." ~ Mark Deming, Rovi

Centa Boyd
as Woman at Party

Cara Kanak
as Woman at Party