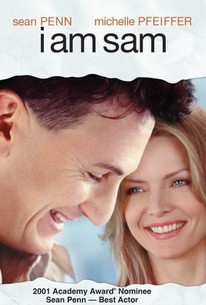 Not only does the manipulative I Am Sam oversimplify a complex issue, it drowns it in treacle.

I Am Sam Ratings & Reviews Explanation

I Am Sam Photos

Sam Dawson is a mentally challenged father raising his daughter Lucy with the help of an extraordinary group of friends. As Lucy turns seven and begins to intellectually surpass her father, their close bond is threatened when their situation comes under the scrutiny of a social worker who wants Lucy placed in foster care. Faced with a seemingly unwinnable case, Sam vows to fight the legal system and forms an unlikely alliance with Rita Harrison, a high-powered, self-absorbed attorney who initially takes his case pro bona as a challenge from her colleagues. On the surface the two couldn't be further apart, but in reality they are subtly similar. Sam's compulsive nature is mirrored in Rita's more socially acceptable obsessive-compulsive nature. Together they struggle to convince the system that Sam deserves to get his daughter back and, in the process, fuse a bond that results in a unique testament to the power of unconditional love.

Michael B. Silver
as Dr. Jaslow

R.D. Call
as Cop at Park

Will Wallace
as Bill Carpenter

Critic Reviews for I Am Sam

Audience Reviews for I Am Sam

I Am Sam Quotes