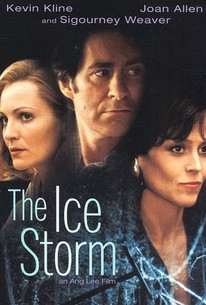 Set on Thanksgiving weekend of 1973, The Ice Storm looks into the lives of a wealthy Connecticut family who are calm and civil on the outside, but whose lives are quietly falling into chaos. Sixteen-year-old Paul Hood (Tobey Maguire) is home for the holidays from prep school; he'd just as soon have stayed at school, given the usual level of tension around the house and his desire to win the affections of Libbets Casey (Katie Holmes), a girl living in Manhattan. His 14-year-old sister, Wendy (Christina Ricci), is already a hardened cynic obsessed with the ongoing Watergate investigation, and she has begun acting out sexually with a neighbor boy, Mikey (Elijah Wood). Apparently, this runs in the family: Wendy's father, Ben (Kevin Kline), is having an affair with Mikey's mother, Janey (Sigourney Weaver), though Ben sees a future in the relationship and Janey does not. Elena (Joan Allen), Ben's wife, knows something is wrong with her marriage and her life, but she has no idea what she should do about it. As the teenagers surreptitiously experiment with drugs and alcohol, and the adults drift into mate-swapping, a dangerous blanket of freezing rain begins to cover New Canaan. The Ice Storm was adapted from the acclaimed novel by Rick Moody. ~ Mark Deming, Rovi

News & Interviews for The Ice Storm

11 Most Disastrous Movie Thanksgivings Ever
View All

Critic Reviews for The Ice Storm

Audience Reviews for The Ice Storm