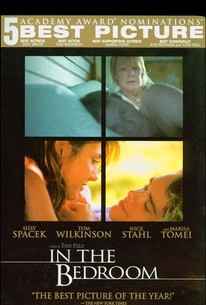 Expertly crafted and performed, In the Bedroom is a quietly wrenching portrayal of grief.

In the Bedroom Ratings & Reviews Explanation

In the Bedroom Photos

Character actor and noted photographer Todd Field made his directorial debut with this emotionally powerful drama, which earned enthusiastic reviews at the 2001 Sundance Film Festival. Frank Fowler (Nick Stahl) is a handsome and amiable young man who has recently graduated from high school and is spending the summer working as a lobster fisherman before heading off to college in the fall. Frank is also involved with Natalie (Marisa Tomei), an attractive woman ten years his senior who is separated from her husband Richard (William Mapother), though their divorce has not yet been finalized. Frank's parents, Matt (Tom Wilkinson) and Ruth (Sissy Spacek) wonder if it's wise for their son to be pursuing a romance that he won't be able to continue in a few months; Matt trusts Frank and leaves him to make his own decisions, while Ruth quietly but firmly registers her objections. One day, Richard snaps, and breaks into Natalie's home; when he discovers Frank is there, he viciously kills him. The wheels of justice turn in an unexpected direction, and Richard is released on bail, free to go his own way as he awaits his trial. Matt and Ruth are both deeply traumatized by the event; while Matt tries to deal with his hurt by retreating into his work and avoiding his feelings, Ruth instead becomes increasingly withdrawn, losing interest in her job as a music teacher and spending her nights chain smoking in front of the television. In the Bedroom was adapted from the short story Killings by Andre Dubus. ~ Mark Deming, Rovi

Terry A. Burgess
as D.A.

Veronica Cartwright
as Minister on television

The Honorable Joseph Field
as Judge

Anna Winsor
as Chorus
View All

News & Interviews for In the Bedroom

Critic Reviews for In the Bedroom

Audience Reviews for In the Bedroom

In the Bedroom Quotes