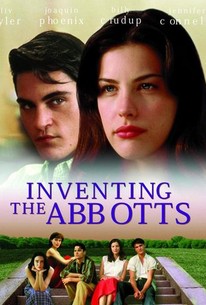 The lives of two closely linked, small town Illinois families dangerously intersect in this domestic drama set in the 1950s, based on a short story by Sue Miller and directed by Pat O'Connor. Though they are from the wrong side of the tracks, the working class brothers Jacey (Billy Crudup) and Doug Holt (Joaquin Phoenix) are in love with the wealthy and beautiful Abbott sisters. Shy and quiet Doug, who worships his womanizing brother, has eyes for the iconoclastic Pam (Liv Tyler), but Jacey's affections are more calculating; he's interested in whichever Abbott sister is interested in him. At first, this is Eleanor (Jennifer Connelly), the "wild" sister, but eventually Jacey sets his sights on the divorced oldest sister, Alice (Joanna Going). For Jacey, his conquest of the Abbotts is a form of economic revenge, as he believes that the head of the family, Lloyd (Will Patton), stole a patent that made him rich from the Holts' late father. When he's eventually revealed as an embittered cad, Jacey's mistreatment of the Abbott girls makes the genuine affection between Doug and Pam impossible for either family to accept. ~ Karl Williams, Rovi

Will Patton
as Lloyd Abbott

Amanda Sherman
as Giggling Girl No. 2

Critic Reviews for Inventing the Abbotts

Audience Reviews for Inventing the Abbotts