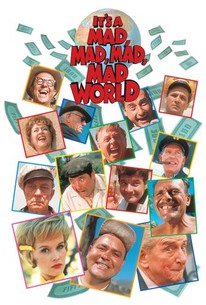 It's long, frantic, and stuffed to the gills with comic actors and set pieces -- and that's exactly its charm.

With this all-star Cinerama epic, producer/director Stanley Kramer vowed to make "the comedy that would end all comedies." The story begins during a massive traffic jam, caused by reckless driver Smiler Grogan (Jimmy Durante), who, before (literally) kicking the bucket, cryptically tells the assembled drivers that he's buried a fortune in stolen loot, "under the Big W." The various motorists setting out on a mad scramble include a dentist (Sid Caesar) and his wife (Edie Adams); a henpecked husband (Milton Berle) accompanied by his mother-in-law (Ethel Merman) and his beatnik brother-in-law (Dick Shawn); a pair of comedy writers (Buddy Hackett and Mickey Rooney); and a variety of assorted nuts including a slow-wit (Jonathan Winters), a wheeler-dealer (Phil Silvers), and a pair of covetous cabdrivers (Peter Falk and Eddie "Rochester" Anderson). Monitoring every move that the fortune hunters make is a scrupulously honest police detective (Spencer Tracy). Virtually every lead, supporting, and bit part in the picture is filled by a well-known comic actor: the laughspinning lineup also includes Carl Reiner, Terry-Thomas, Arnold Stang, Buster Keaton, Jack Benny, Jerry Lewis, and The Three Stooges, who get one of the picture's biggest laughs by standing stock still and uttering not a word. Two prominent comedians are conspicuous by their absence: Groucho Marx refused to appear when Kramer couldn't meet his price, while Stan Laurel declined because he felt he was too old-looking to be funny. Available for years in its 154-minute general release version, the film was restored to its roadshow length of 175 minutes on home video; the search goes on for a missing Buster Keaton routine, reportedly excised on the eve of the picture's premiere. ~ Hal Erickson, Rovi

William Demarest
as Chief of Police

Buster Keaton
as Jimmy the Crook

Ben Lessy
as George the Steward

Jack Benny
as Man on Road

Chick Chandler
as Detective Outside Laundromat

Roy Roberts
as Policeman Outside Garage

If Avengers: Infinity War Is Too Intense for Your Kids, Here Are Three Alternatives
Jerry Lewis’ Best Films by Tomatometer
Jackie Brown, Vikings S4, Manchester by the Sea, and More on Netflix and Amazon Prime This Week
View All