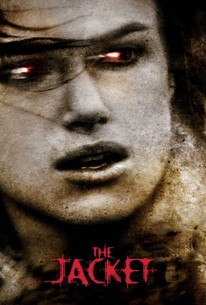 The Jacket is a case of creepy style over substance.

A troubled war veteran tries to unlock his memories of a terrible crime in this stylish thriller, the first American project for British filmmaker John Maybury. In 1991, Jack Starks (Adrien Brody) was an American soldier serving in the Persian Gulf when he was shot in the head; pronounced dead by a field surgeon, Starks somehow returned to life, though with no small number of psychological problems to show for his troubles. A year later, Starks is walking through the snowy Vermont wilderness when he discovers a woman whose truck has broken down, Jean (Kelly Lynch). Starks tries to help Jean and her young daughter, and later flags down a car for a ride into town; however, the car is being driven by a criminal on the run from the police (Brad Renfro), and not long after the car is cornered by police, Starks' memory goes blank. When he comes to, Jack is accused of killing a patrolman in the violent standoff that followed, and is told that the woman, her daughter, and the criminal existed only in his imagination. Declared insane in his murder trial, Starks is sentenced to a mental institution run by Dr. Becker (Kris Kristofferson), who seems to believe that the more brutal the treatment, the better. As Starks suffers frequent beatings and long spells in a frozen locker, his mind drifts from his harrowing past into the future, where he visits with Jackie (Keira Knightley), who once was the young girl Starks tried to help. The Jacket also features Jennifer Jason Leigh as Dr. Lorenson, a compassionate doctor who tries to help Starks and his fellow patients.

Brad Renfro
as The Stranger

News & Interviews for The Jacket

Critic Reviews for The Jacket

Audience Reviews for The Jacket