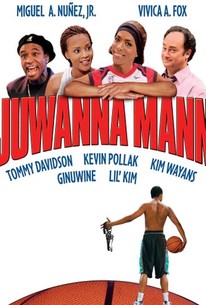 It's Big Momma's House on the three-point line in this broad farce, which marks the leading man/woman debut of longtime character actor Miguel A. Nunez. Nunez stars as Jamal Jefferies, a hotheaded pro basketball player whose on-court antics and quick temper get him booted from the league altogether. Faster than you can say Dennis Rodman, Jamal has transformed himself into the busty Juwanna Mann in order to be a forward for a high-intensity team in the WUBA league, the Charlotte Banshees. Behind the doors of the womens' lockerroom, Jamal unexpectedly falls for Michelle Langford (Vivica A. Fox), the team's no-nonsense captain. But prosthetic breasts and false eyelashes aren't the only thing preventing Jamal from finding true love with Michelle: there's also the problem of her aggressive, two-timing boyfriend, Romeo (Ginuwine), not to mention the unwanted advances Juwanna gets from a skanky rapper named Puff Smokey Smoke (Tom Davidson).

Vivica A. Fox
as Michelle Langford

Jeanne Zelasko
as herself

Chris Myers
as Himself

Roy Firestone
as himself

Kenny Albert
as himself

Kevin Frazier
as himself

Cynthia Cooper
as herself

Katy Steding
as herself

Teresa Weatherspoon
as herself

Jay Leno
as himself