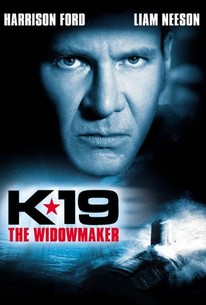 A gripping drama even though the filmmakers have taken liberties with the facts.

A real-life historical incident becomes the basis for this military thriller from director Kathryn Bigelow that's reminiscent of such submarine dramas as Das Boot (1981), The Hunt for Red October (1990), Crimson Tide (1995), and U-571 (2000). Harrison Ford stars as Captain Alexi Vostrikov, a Russian naval officer who's being given command of the Soviet Union's first nuclear submarine, K-19, at the height of the Cold War in 1961. The vessel's previous commander, Captain Mikhail Polenin (Liam Neeson) has been demoted to executive officer following a botched test and his outspoken assertions that the flagship is not yet ready for deployment, but he curbs his resentment and resolves to serve his new superior well. Polenin's concerns are well founded: parts are not yet installed, equipment is missing, and the ship's doctor is killed in an auto mishap. Political pressure forces Vostrikov to sail his crew into the North Atlantic anyway, for a missile fire test that serves as a warning to the U.S. that its enemy is now its technological equal. The test is a success, but a disastrous leak in the K-19's reactor cooling system soon threatens to create enough heat to detonate the craft's nuclear payload -- which would certainly be mistaken for the first salvo in a worldwide atomic exchange and spark the beginning of World War III. With no other option, Vostrikov orders his men to repair the damage in ten-minute shifts, irradiating them hopelessly. The conflict between the seemingly bureaucratic Communist Vostrikov and the more humane Polenin escalates, until a surprising twist reveals where both officers' loyalties truly lie. ~ Karl Williams, Rovi

News & Interviews for K-19: The Widowmaker

Newcomer Takes a Stab at a "Sisters" Remake
Critical Consensus: Critics Not Tickled "Pink"
View All

Critic Reviews for K-19: The Widowmaker

Audience Reviews for K-19: The Widowmaker