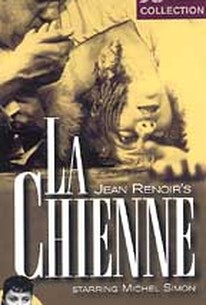 Jean Renoir's first sound film was a bitter and highly controversial psychological drama, so controversial that it was never shown in the United States until 1975, 44 years after its original French release. Maurice (Michel Simon) is a meek bank clerk trapped in a marriage with a harridan named Adele (Magdelaine Berubet). Maurice's sole pleasure in life is painting, a hobby he avidly pursues on weekends. One day, Maurice sees a woman on the street being beaten by a man; he steps in to rescue her, and strikes up a friendship with her. Maurice soon falls in love with Lulu (Janie Pelletier), unaware that she's a prostitute and that the man who was beating her is her pimp, Dede (Georges Flamant). Lulu admires Maurice's paintings, and he gives her several canvases; Lulu and Dede then invent an American artist named Clara Wood and place Clara's signature on Maurice's works before selling them to an art dealer, who is quite impressed. Maurice keeps giving money and artwork to Lulu, forgiving her even after he finds out that she's been selling paintings by "Clara Wood" that are earning high prices and enthusiastic reviews. However, Maurice is unaware that Lulu's a streetwalker or that she truly loves Dede until he catches the two in bed together; eventually, love leads to jealous violence and a tragic conclusion. While Pelletier gave a remarkable performance in La Chienne, she was unable to enjoy the film's wide acclaim; she died in an auto accident only a few weeks after shooting was completed. ~ Mark Deming, Rovi

Jane Pierson
as The Concierge

Henri Guisol
as Amedee, the Waiter at the Cafe

Peirre Destys
as Gustave, a Pal of DeDe

Lucien Mancini
as Walstein, the Art Dealer
View All

On DVD This Week: 10 Cloverfield Lane, The X-Files, London Has Fallen, and More
View All