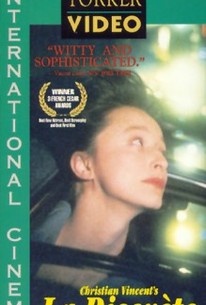 When the arrogant, womanizing narrator, Antoine (Fabrice Luchini), goes to meet his girlfriend, Solange (Marie Bunel) at the train station, he's dismayed to find her with another man. Antoine tells us that this is a first. He is always the one to end his relationships with women. Antoine visits his elderly friend, Jean (Maurice Garrel), a book dealer, and tells him that he wants revenge, but he doesn't have the imagination to come up with a plan. Eventually, Jean tells Antoine that he knows a publisher who's interested in publishing a series of diaries. He suggests that to get his revenge, not just on Solange but on all women, Antoine should get another woman to fall completely in love with him and then dump her, while keeping a detailed journal about the affair. Antoine agrees, placing an ad for a typist to meet someone. Catherine (Judith Henry) responds to the ad. Antoine is initially repulsed by Catherine, but Jean pushes him to pursue her, saying Antoine's lack of interest will make the story even more interesting. Antoine assents, on the condition that Jean tell him exactly how to proceed. Antoine follows Jean's advice. Catherine resists his advances at first, and as Antoine gets to know her, he finds himself becoming more and more attracted to her. La Discrete won Cesar Awards for Best First Work, Best Writing, and Most Promising Actress (Henry). It also won the FIPRESCI Award at the 1990 Venice Film Festival.

Maria Verdi
as Woman in Restaurant

Sophie Broustal
as Girl in Pink
View All

There are no critic reviews yet for La Discrete. Keep checking Rotten Tomatoes for updates!

There are no featured audience reviews for La Discrete at this time.