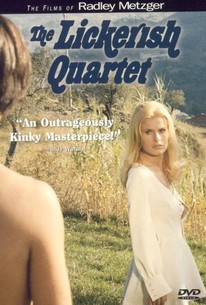 Master of sophisticated sexploitation Radley Metzger directed this elegant and thoughtful erotic drama. A wealthy and jaded couple living in a palatial Italian villa (Erika Remberg and Frank Wolff) spend an evening watching pornographic films with their adult son (Paolo Turco). Looking for a change of scenery, the family visits a carnival where they see a stuntwoman performing tricks on a motorcycle. When she removes her helmet, they're surprised to discover that the stunt rider appears to be one of the "stars" of the film they watched earlier, except that her blonde hair has turned dark. They invite her back to the villa, only to find out that the images in the film seem to have changed, and the face of the woman onscreen is no longer recognizable. Eventually, the strange woman begins to interact sexually with the mother, father, and son as they walk a fine line between reality and illusion. As with most of his work, the American-born Metzger shot this film in Europe with cinematographer Hans Jura, whose rich color images add immeasurably to this film's impact.

Erika Remberg
as The Woman

Paolo Turco
as The Boy

Frank Wolff
as The Man

Critic Reviews for The Lickerish Quartet

Audience Reviews for The Lickerish Quartet