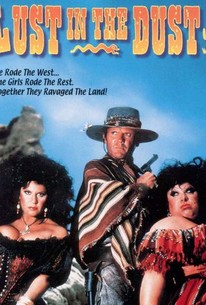 Lust in the Dust

A controversial spoof on the Spaghetti western (some love it, some hate it), Lust in the Dust features the 300-pound Divine as the inimitable Rosie Velez, riding into view in full drag on a poor donkey as solemn commentary muddles on about the passions that enslave men and women -- and then Rosie, who weighs more than the donkey, is gang-raped by Hard Case Williams' (Geoffrey Lewis) outlaws. Eventually Rosie is rescued by the tough, taciturn cowboy Abel Wood (Tab Hunter), and together they reach the miserable town of Chili Verde where the entire population, not many after all, can always be found at a saloon run by Marguerita Ventura (Lainie Kazan) and her nit-wit bouncer/gunslinger, Bernardo (Henry Silva). Abel soon discovers that the reason why the population is so interested in Marguerita's saloon has nothing to do with hard liquor -- Marguerita and Rosie each have one half of a map of buried treasure tattooed on their backsides, and everyone wants a look at the whole map. That situation introduces rather absurd bedroom farce. Viewers with a very broad if not bawdy sense of humor will most enjoy this earthy exercise in parody.

Ernie Shinagawa
as Chang
View All

Critic Reviews for Lust in the Dust

Audience Reviews for Lust in the Dust

Lust in the Dust Quotes