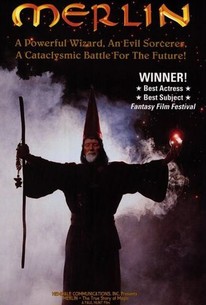 Edited down from the original 126 minutes to 112, this modern-day update of the Merlin legend from director Paul Hunt is still just an overlong exploitation movie gussied up as a prestige production. Nadia Cameron stars as reporter Christy Lake, who is actually the Lady of the Lake, the daughter of Merlin (Rodney Wood). It takes three different prologues to place Merlin's sword in modern-day California, where local businessman Pendragon (Richard Lynch) is continuing his ancient quest to get the sword from Merlin's assistant, Loong Tao (James Hong), so he can bend time and plunge the world into the anarchy and madness of October 32 (the film's original title). Christy and her geologist boyfriend (Peter Phelps), who is actually the medieval knight who has loved her for centuries, gets involved in the chases, fights, and battles, but it's all somewhat anticlimactic because Merlin just zaps in to take care of things in the end. Hunt telegraphs every surprise in the film ahead of time (sometimes several times); the effects are dreadful and the Czechoslovakian settings don't look very much like California. Even cinematographer Gary Graver (aka Robert McCallum), who directed several scenes here and has made hundreds of films (mostly in California), doesn't seem to know how to make Bratislava look any less European. Anyone wondering why some good low-budget filmmakers don't get more ambitious projects should study this picture as a case in point. Cult viewers may want to watch for Lynch, Hong, and Desmond Llewellyn, all of whom turn in reasonably entertaining performances, but most others will want to give this endless, deadly, dull film a wide berth.

There are no critic reviews yet for Merlin. Keep checking Rotten Tomatoes for updates!

There are no featured audience reviews for Merlin at this time.