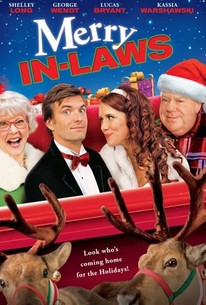 A man with a magical secret finds his engagement to his beautiful fiancée threatened by her cynical parents during the most wonderful time of the year. When Peter tells his parents that he has popped the question to Alex, the eccentric couple can't wait to meet their future daughter-in-law. As the snow begins to fall and the two families gather to celebrate, Alex experiences a sense of joy she hasn't felt since childhood. And for good reason, too - her new in-laws are none other than Santa and Mrs. Claus! Meanwhile Alex's skeptical father and his scheming colleague plot to snuff all sense of wonder out of the holiday season. But there's much more at stake here than just a young couple's happiness, and as Alex's young son Max begins to learn the truth about Peter's jovial parents, the very future of Christmas rests in one family's ability to believe in the legend that inspires wonder in children around the world. ~ Jason Buchanan, Rovi

Tayden Marks
as Walter
View All

There are no critic reviews yet for Merry In-Laws. Keep checking Rotten Tomatoes for updates!

There are no featured audience reviews for Merry In-Laws at this time.