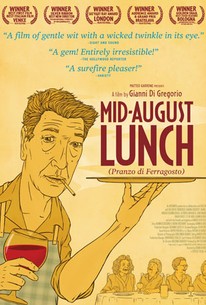 A man unexpectedly finds himself talking care of four women, three of whom he barely knows, in this sunny comedy from Italy. Gianni (Gianni di Gregorio) is a man in his mid-sixties who still lives with his mother; given that Valeria (Valeria De Franciscis) is well into her nineties, these days he looks after her rather than the other way around, though she remains quite spry given her age. Gianni and Valeria share an apartment in a building owned by Luigi (Alfonso Santagata); Gianni owes money on the rent, and Luigi, who wants to take off for the midsummer festivities of Ferragosto, makes him a deal -- Luigi will forgive the debt if his elderly mother, Marina (Marina Cacciotti), can stay with Gianni and Valeria for a few days. Gianni grudgingly agrees, but is upset when he discovers Luigi has also brought his aging aunt Maria (Maria Calì). Word apparently circulates that Gianni is running an informal home for the elderly, as his friend Marcello (Marcello Ottolenghi) stops by and drops off his mother, Grazia (Grazia Cesarini Sforza), for a day or two. While Gianni scrambles to look after the various needs of four elderly women, it soon becomes clear the ladies have strongly differing views on a number of subjects, making his job all the more difficult. Pranzo di Ferragosto (aka Mid-August Lunch) was written and directed by Gianni di Gregorio, who also played the harried son; it was the first directorial project for the veteran screenwriter.

Critics Consensus: Wimpy Kid Gets Picked On
View All