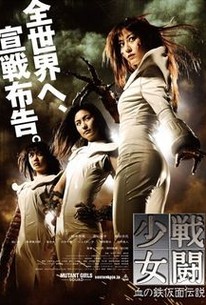 A teenage girl takes on the powers that be who have plans for her and her friends in this over-the-top sci-fi action yarn from the filmmaking team of Noboru Iguchi, Yoshihiro Nishimura and Tak Sakaguchi. Rin (Yumi Sugimoto) has always felt like an outcast among her classmates and peers, and as she's about to turn sixteen, she finds out why -- while her mother (Maiko Ito) is human, her dad (Kanji Tsuda) is a Hiruko, a race of mutant creatures whose bodies transform themselves in strange ways and can sprout weapons at will. Defense Minister Koshimizu (Naoto Takenaka) has launched a crusade to eliminate the Hirukos in the name of public safety, but Rin's father tells her of an underground Hiruko alliance who are fighting for their right to survive, and after the death of her parents, Rin makes her way to a training camp for young Hirukos. Rin, who now has long blades where her fingers used to be, teams up with fellow teenage warriors Rei (Yuko Takayama), Yoshie (Suzuka Morita), Sachie (Cay Izumi) and Chiako (Naoi Nagano), all of whom have unique bodily weapons of their own, as they set out to take down Koshimizu. Sento Shojo: Chi No Tekkamen Densetsu) (aka Mutant Girls Squad) received its North American premiere at the 2010 New York Asian Film Festival.