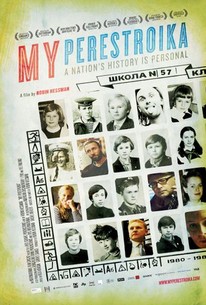 International Film Circuit is proud to present US Theatrical release of MY PERESTROIKA, Robin Hessman's intimate and lovingly crafted portrait of the last generation of Soviet children brought up behind the Iron Curtain. Since premiering at the 2010 Sundance Film Festival, the film has screened at some of the world's top documentary showcases, including the Full Frame Festival (Filmmaker Award), Silverdocs (Special Jury Award), New Directors/New Films, Sheffield Doc/Fest, Rotterdam Film Festival and IDA's DocuWeek in Los Angeles. MY PERESTROIKA will open in New York on Wednesday, March 23 at IFC Center and in Los Angeles on April 15. Many other cities will follow.
When the USSR broke apart in 1991, a generation of young people faced a new realm of possibilities. An intimate epic about the extraordinary lives of this last Soviet generation, Robin Hessman's feature documentary debut tells the stories of five Moscow schoolmates who were brought up behind the Iron Curtain, witnessed the joy and confusion of glasnost, and reached adulthood right as the world changed around them. Through candid first-person testimony, revealing verité footage, and vintage home movies, Hessman, who spent many years living in Moscow, reveals a Russia rarely ever seen on film, where people are frank about their lives and forthcoming about their country. Engaging, funny, and positively inspiring, in MY PERESTROIKA politics is personal, honesty overshadows ideology, and history progresses one day, one life at a time. -- (C) International Film Circuit

Critic Reviews for My Perestroika

Audience Reviews for My Perestroika