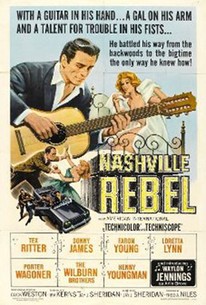 Waylon Jennings stars as an up-and-coming country singer in this low-budget musical drama. Arlin Grove (Jennings) has just finished a hitch in the Army, and decides to give a career in music a shot upon returning to civilian life. Grove starts playing shows at local honky-tonks and begins to develop a reputation as an act to watch, as well as a loyal following. Grove also attracts the attention of pretty Molly Morgan (Mary Frann), and before long the two are married. Grove is approached by a manager who promises to make him a star and get him on the Grand Ole Opry, but it isn't until it's too late that Grove discovers he's been working with a phony. Depressed, Grove starts hitting the bottle hard, but Molly refuses to give up on her husband and arranges for him to get a prime gig in Nashville on her own. Along with Jennings in his big screen debut, Nashville Rebel also features vintage performances from Loretta Lynn, Faron Young, Porter Wagoner, Tex Ritter, Sonny James, and Henny Youngman.

Tex Ritter
as Himself

Sonny James
as Himself

Faron Young
as Himself

Loretta Lynn
as Herself

Porter Wagoner
as Himself

Henny Youngman
as Himself

Archie Campbell
as Himself

Cousin Jody
as Himself
View All

There are no critic reviews yet for Nashville Rebel. Keep checking Rotten Tomatoes for updates!

There are no featured audience reviews for Nashville Rebel at this time.