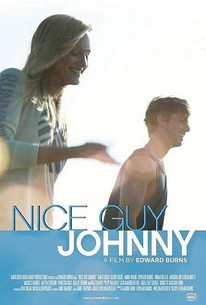 A man determined to right suddenly isn't sure what the right thing should be in this independent comedy-drama. One of the few things Johnny Rizzo (Matt Bush) loves as much as his job as a host on a sports-talk radio station is his longtime fiancée Claire (Anna Wood), who is gently but firmly persuading him to find a more responsible career. Johnny's show is currently airing at 2 a.m. and doesn't pay very well, and as much as he enjoys it, he decides to make good on a promise he made to Claire that if he wasn't making at least $50,000 a year by the time he turned 25, he'd take a job with her wealthy father's box making company. As Johnny heads to the Hamptons to meet with Claire's dad, he ends up staying with his Uncle Terry (Edward Burns), a chronic womanizer determined to show Johnny a good time whether he likes it or not. Loyal Johnny isn't interested in any of the gals Terry throws his way, but when he meets Brooke (Kerry Bishe), a beautiful woman who is giving tennis lessons to Terry's (married) girlfriend, for the first time in years he finds himself infatuated with someone else. Johnny is thrown for a loop when Brooke tells him the last thing he should do is give up his job for Claire. Written and directed by Edward Burns (who cast himself as Uncle Terry), Nice Guy Johnny received its world premiere at the 2010 Tribeca Film Festival.