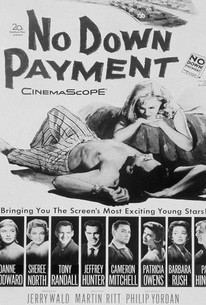 No Down Payment Ratings & Reviews Explanation

No Down Payment Photos

A handful of suburban couples discover that emotional turmoil lurks behind the placid exterior of the planned community of Sunrise Hills in this drama based on the novel by John McPartland. David and Jean Martin (Jeffrey Hunter and Patricia Owens) find their relationship starting to crumble after Jean is raped by Troy Boone (Cameron Mitchell), an alcoholic war veteran who has been unable to readjust to civilian life. Meanwhile, Troy's wife, Leola (Joanne Woodward), wants to start a family, but Troy isn't interested in having children. Jerry Flagg (Tony Randall) is a used car salesman who turns to drink to deal with the disappointments of his career and his life, which is more than his wife, Isabelle (Sheree North), bargained for in their relationship. And Herman Kreitzer (Pat Hingle) is the good-hearted proprietor of a hardware store who wants to help his Japanese-American assistant Iko (Aki Aleong) find a new home. Though Herman's wife, Betty (Barbara Rush), discourages him because of the reaction that she foresees from the rest of the community, she eventually sides with him and joins him in the effort to help Iko assimilate. ~ Mark Deming, Rovi

Nolan Leary
as Reverend
View All

Critic Reviews for No Down Payment

There are no critic reviews yet for No Down Payment. Keep checking Rotten Tomatoes for updates!

Audience Reviews for No Down Payment

There are no featured audience reviews for No Down Payment at this time.

No Down Payment Quotes