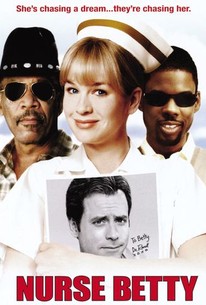 Quirky in the best sense of the word, Nurse Betty finds director Neil LaBute corralling a talented cast in service of a sharp, imaginative script.

The winner of the Best Screenplay award at the 2000 Cannes Film Festival, this film is a darkly comic story about one woman's incredible determination to make her dreams come true against numerous odds. Fantasy collides with reality as Betty Sizemore, a small-town waitress and soap opera fan, inspires herself and everyone she meets to find at least a piece of their real selves throughout this romantic, dangerously funny road picture. The popular TV daytime drama "A Reason to Love" has an especially devoted viewer in Betty. One night, watching a videotape of that day's episode, she becomes an accidental witness to a deal going fatally awry for her no-good car salesman husband. Betty, traumatized, enters into a fugue state that allows - even encourages - her to keep functioning, in a kind of alternate reality. Betty Sizemore becomes "Nurse Betty," who is set on returning to the love of her life, the show's Dr. David Ravell. Betty promptly sets off for Los Angles in a "borrowed" 1997 Buick LeSabre - which is precisely what her late husband's killers are looking for. As Betty makes contact with Dr. Ravell and the hit men slowly but surely track her down, life begins to imitate art and vice versa.

Kevin Rahm
as Friend No. 1

Steven Culp
as Friend No. 2

Deborah May
as Gloria Walsh