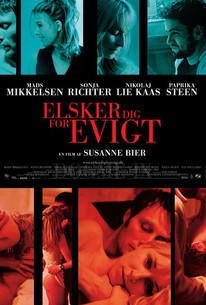 Pulsing with honesty, this film lays bare the rawness of human emotion with a story made all the more believable thanks to its gritty, low-budget approach.

Two people are brought together by a tragic accident in this emotional drama. Joachim (Nikolaj Lie Kaas) and Cecilie (Sonja Richter) are a couple in Copenhagen who've fallen deeply in love and have made plans to marry. One day, Joachim is severely injured in an auto accident when he's struck by a woman named Marie (Paprika Steen), leaving him paralyzed from the neck down. As fate would have it, the doctor put in charge of Joachim's care is Niels (Mads Mikkelsen), who happens to be Marie's husband. Joachim, deeply depressed since the accident, tells Cecilie to leave him and find someone else, but while she intends to stay with the man she loves, she finds it increasingly difficult to deal with his mood swings and frequent anger. Meanwhile, Marie, wracked with guilt over the accident, asks her husband to look after Cecilie, and as they spend more and more time together, they find themselves becoming increasingly attracted. Eventually, Cecilie and Niels become lovers, leaving them both to deal with their betrayal of the people they've sworn to stand by. Filmed following the austere guidelines of the Dogma 95 movement, Open Hearts received its North American premier at the 2002 Toronto Film Festival and was screened in competition at the 2003 Sundance Film Festival.

Susanne Juhasz
as Cashier at ISO