The Opposite of Sex 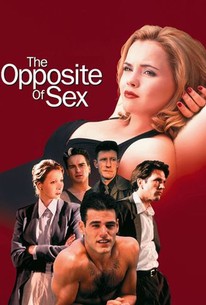 The Opposite of Sex

The Opposite of Sex smartly lightens a bitter story with sharp insights and strong dialogue - as well as a startlingly mature performance from former child actor Christina Ricci.

The Opposite of Sex Ratings & Reviews Explanation

The Opposite of Sex Photos

Screenwriter Don Roos made his directorial debut with this oddball sex comedy. The tale is narrated by 16-year-old Louisiana tramp Dedee Truitt (Christina Ricci), who buries her stepfather and then heads for Indiana to visit her homosexual half-brother Bill (Martin Donovan). Recovering from the AIDS death of longtime companion Tom, schoolteacher Bill has linked up with a new partner, handsome Matt (Ivan Sergei). After Dedee seduces Matt and claims she's pregnant by him, the couple steals $10,000 from Bill's safety deposit box and heads for L.A. Alarmed by Matt's seeming disappearance and hoping to blackmail Bill into disclosing Matt's whereabouts, Bill's former student (also Matt's former beau) Jason (Johnny Galecki) accuses Bill of molestation four years previous, a charge that jeopardizes Bill's job as a schoolteacher. To clear his name, Bill, and Tom's sister Lucia (Lisa Kudrow), leave for L.A. to locate Matt and Dedee. Lucia is a repressed old maid who flinches from even the thought of sex, but even so, weird Sheriff Tippett (Lyle Lovett) takes a fancy to her. Meanwhile, questions are raised about the true father of Dedee's baby, and the film comes to a climax with a shooting, a cross-county chase, and the inevitable showdown between the quirky characters. Shown at the 1998 Sundance Film Festival.

News & Interviews for The Opposite of Sex

Critic Reviews for The Opposite of Sex

Audience Reviews for The Opposite of Sex

The Opposite of Sex Quotes