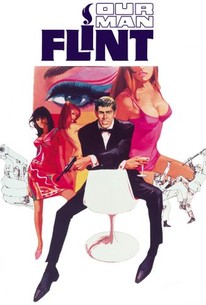 James Coburn stars as super-spy Derek Flint in this action comedy which takes the tongue-in-cheek wit of the James Bond series and shifts it into high gear. Flint is an ultra-sophisticated operative of international intelligence agency Z.O.W.I.E. He's a master of martial arts, electronic gadgetry (his cigarette lighter can perform 83 special functions), languages both human and animal (he can communicate with dolphins in a pinch), and even gives ballet lessons to the dancers of the Bolshoi. So when his fellow agents begin dropping like flies, Z.O.W.I.E. assigns Flint the task of finding out who the killers happen to be. Eventually, Flint discovers that the killings are all part of the wicked machinations of G.A.L.A.X.Y., a cadre of world-wide villainy that plans to take over the world through weather control. Our Man Flint also stars Lee J. Cobb, Gila Golan, and Edward Mulhare. A sequel, In Like Flint, followed two years later, and in 1976, the character was revived for a TV movie, Our Man Flint: Dead on Target, with Ray Danton taking over the role of Derek Flint. ~ Mark Deming, Rovi

Harry Monty
as Uncredited
View All

Critic Reviews for Our Man Flint

Audience Reviews for Our Man Flint