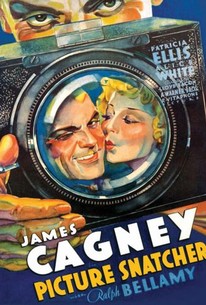 An admirably tough B-picture enlivened by an energetic James Cagney performance, Picture Snatcher stars Cagney as Danny Kean, a former gangster who has decided to go straight after a stretch in the big house. Danny has fallen for Patricia (Patricia Ellis), the daughter of the cop who put him away (Robert Emmett O'Connor). Dad isn't convinced that Danny has left his life of crime behind him, and he isn't too impressed with his new career taking pictures for a sleazy tabloid newspaper. Between getting a lurid photo of a fireman in front of a burning building (where his wife and her lover met their fate) and a daring shot of a woman being executed (based an actual incident when a New York Daily News photographer got a photo of Ruth Snyder in the electric chair), Danny's work is selling papers but hardly making Officer O'Connor think his daughter is in good hands (especially since he was in charge of press security for the execution). Short, sweet and sassy, Picture Snatcher is the sort of gutsy fare Warner Bros. did best in the 1930's; Ralph Bellamy turns in a great supporting performance as Danny's boozy editor.

Milton Kibbee
as Reporter Outside Prison