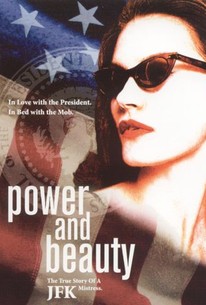 Beauty and Power tells the sordid tale of Judith Exner (Natasha Henstridge), who claimed to have dated Frank Sinatra (John Ralston) and to have been the mistress of Jack Kennedy (Kevin Anderson, who played also Bobby Kennedy in Hoffa). The story is told in flashback, from Exner's point of view. In voice-overs, Exner breaks her life down into three critical mistakes -- the three major romantic relationships in her life. The first, she explains, was marrying Billy Campbell (Grant Nickalls), who was more concerned with his acting career than with their marriage, and who cheated on her frequently. Her friendship with an L.A.-based mobster leads to an affair with Sinatra, which she breaks off after he tries to involve her in a ménage a trios. She remains friends with Sinatra, and then meets Kennedy while he's just beginning his primary campaign for the presidency, and she soon falls in love with him. At around the same time, she meets Chicago gangster Sam Giancana (Peter Friedman), who falls in love with her and is jealous of her romance with Kennedy. Eventually she becomes a liaison between the presidential candidate and the mob, carrying briefcases of Kennedy money to Giancana for his help with the election. Kennedy professes his love for her and tells her that his marriage is just for show, and that he'll get a divorce if he doesn't win the presidency. Of course, things don't work out the way Exner might have hoped. The FBI begins harassing her, and she grows frustrated with her arrangement with the president. Beauty and Power debuted on Showtime in July 2002. It was directed by Susan Seidelman (Desperately Seeking Susan).

Kathy Maloney
as Woman
View All

Critic Reviews for Power and Beauty

There are no critic reviews yet for Power and Beauty. Keep checking Rotten Tomatoes for updates!

Audience Reviews for Power and Beauty

There are no featured audience reviews for Power and Beauty at this time.