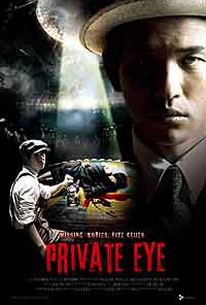 A string of serial murders rock Seoul, Korea, forcing a medical physician and an aspiring detective to undertake their own amateur investigation, in this offbeat period mystery-thriller. The year is 1910, the place, the heart of the Joseon Dynasty. Hong Jin-Ho (Hwang Jeong-min) longs to establish himself as a private detective -- and sees a move to America as his ticket out of Korea. Meanwhile, a local medical intern, Kwang-soo (Ryoo Deok-hwan), discovers a corpse in the woods and steals it to practice routine dissection -- but it so happens that the body in question belongs to the son of the most powerful figure in Seoul. For this reason, Kwang-soo's possession of the body soon puts him at risk for being tagged as the murderer. Kwang-soo contemplates stealing away in the dead of night, but his path soon criss-crosses with that of Hong, and Kwang-soo asks him to find the murderer. Soon, a second body turns up, murdered in exactly the same way; the gentlemen then team up and use a cloth found in one victim's hand as a clue to track down the killer.