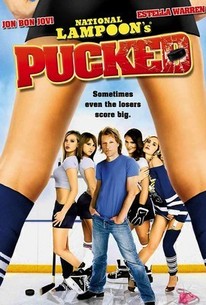 Credit cards and women on skates prove to be a dangerous mixture in this comedy. Frank Hopper (Jon Bon Jovi) is a former lawyer whose career has hit the skids, and he currently lives off the largesse of his more successful sister, Leona (Nora Dunn). Frank has dozens of business ideas, but has no way to finance them, until he heads out with his friend Carl (David Faustino) one evening and fills out a questionnaire in which he jokingly states his income is a million dollars a year. Suddenly Frank's mailbox is flooded with pre-approved credit cards, and with his new line of credit, Frank launches his dream project -- a women's hockey league. But it seems that the world is not yet ready for women playing professional ice hockey, and before long Frank is 300,000 dollars in debt, with a handful of credit agencies taking him to court to get back the money he's spent so far. Frank turns to his former girlfriend Jessica (Estella Warren), now a successful lawyer, to help him stay out of jail, but it seems their work is cut out for them when they learn Jessica's very competitive former beau Norman (Cary Elwes) is prosecuting Frank's case. National Lampoon's Pucked was directed by Arthur Hiller; it was his first directorial project since 1997's An Alan Smithee Film: Burn, Hollywood, Burn, for which Hiller opted not to take credit.

Cary Elwes
as Norman
View All