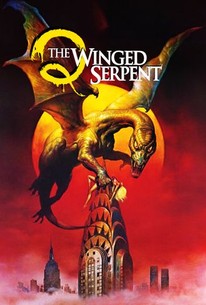 Q's campy charms may be lost on audiences who want their monsters frightening, but a game cast and lovingly retrograde visual effects give this kaiju romp some majesty.

"Q" stands for Quetzalcoatl, the legendary Aztec flying serpent. The pesky, four-clawed aerial lizard has been uprooted from its Mexican home for a New York Museum exhibits; "Q" escapes, nestling in the spires of the Chrysler Building. It swoops down without warning to rip up and decapitate innocent bystanders--and lays eggs all over the city, just ripe for hatching into dead Q-lets. The only person who knows where to find "Q" is a scuzzy ex-convict, brilliantly portrayed by Michael Moriarity, who will help the authorities only if they meet his price. It is at this point that the audience realizes with some astonishment that Moriarity is the only hero this film is ever going to have. Directed by Larry Cohen, Q seems like a high-budget variation of an old American-International monster cheapie--no surprise here, in that the film's producer was American-International cofounder Samuel Z. Arkoff. Q's original title was The Winged Serpent; in some markets, the film carried both titles, merged into one.

Bobbi Burns
as Sunbather
View All