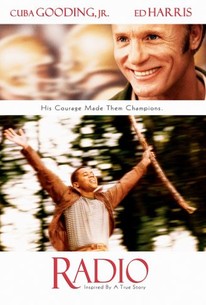 The story is heavy on syrupy uplift and turns Radio into a saint/cuddly pet.

James Robert Kennedy--nicknamed 'Radio' because of his vintage radio collection and his love of music--is a loner in Anderson, South Carolina, pushing his ever-present grocery cart up and down the streets. He speaks to no one and is rarely spoken to, until one day, Coach Harold Jones, one of the town's most respected men, and coach of the popular high school football team, befriends him. Radio is suspicious at first. But Coach Jones is persistent, even enlisting the help of Radio's mother. Jones' friends and family are taken aback as well since, until he met Radio, all his energies were poured exclusively into football. Slowly, Coach Jones earns Radio's trust and opens up a new world to him. He invites Radio to help out at football practice and during games and to sit in on his classes at school, despite the initial misgivings of Principal Daniels. He also champions him to the football players, the students and faculty. Coach Jones' life is also enriched by Radio, from whom he learns to value friendship and family ties as much as he does coaching football. Still, there are those in town who believe that Coach Jones' devotion to the young man is distracting him from his duties as head coach of the football team. There are several attempts to have Radio barred from the classroom and, after his mother's untimely death, remanded to a mental-health facility. Coach Jones valiantly fights off these efforts, but he is finally forced to make a difficult decision, which will impact both his growing friendship with Radio and his career as a football coach.

Michael Harding
as Irv the Cop

Shelley Reid
as Cop No. 2

James Robert "Radio" Kennedy
as Himself

Harold W. Jones
as Himself

Mike Anthony
as Himself
View All

Rotten Tomatoes Radio at Comic-Con
SXSW: Short Reviews of "The King," "The OH in Ohio," "LOL," and "Maxed Out"
Wahlberg Ready to Soar With the Eagles
View All