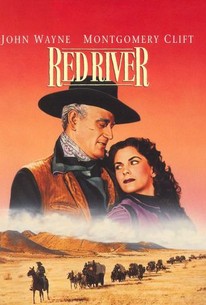 1:29
Red River: Official Clip - Every Time You Turn Around

Director Howard Hawks' second western was also his first collaboration with John Wayne. Officially based on Borden Chase's novel The Chisholm Trail, the film also owes a great deal to Mutiny on the Bounty, both structurally and in the adversarial relationship between the two leading characters. Wayne stars as headstrong frontiersman Tom Dunson, who is taking his leave of a westbound wagon train to seek his fortune in Texas. This impulsive act loses him the love of his fiancée Fen (Colleen Gray) but gains him a lifelong friend in the person of (occasionally) toothless old camp cook Groot Nadine (Walter Brennan). Not long afterward, Dunson discovers that Fen was killed in an Indian raid, a fact that leaves him an emotionless cipher. The only survivor of the tragedy is a young orphan named Matthew Garth (Mickey Kuhn), whom Dunson unofficially adopts as his son. As the years pass, the tactiturn Dunson becomes the most powerful and feared cattle baron in the territory, but the grown-up Garth (now played by Montgomery Clift, in his first film appearance) eventually rebels against Dunson's stubbornness and autocratic behavior, striking out on his own as his surrogate father growls: "Some day you'll turn around and I'll be there; I'm gonna kill ya, Matt." As time passes, Garth, leading his own cattle drive, becomes Dunson's most formidable rival. The huge cast includes John Ireland in perhaps his best role as the enigmatic gunman Cherry Valance; both Harry Carey, Sr. and Harry Carey, Jr.; and an uncredited Shelley Winters as a dance hall girl. Except for the sappy scenes with love interest Joanne Dru, everything works in Red River, from the stirring Dmitri Tiomkin score to Russell Harlan's brooding black-and-white cinematography. In his quest for perfection, Hawks went $1 million overbudget and several months over schedule, but the end result was a $4 million hit. Essential viewing for western buffs in particular and film buffs in general, Red River currently exists in two release versions: the preferable 133-minute directors' cut, and a 125-minute studio cut, narrated by Walter Brennan.

Mickey Kuhn
as Matt as a Boy

Bill Self
as Wounded Wrangler

William Self
as Wounded Wrangler

Tom Tyler
as A Quitter

George Lloyd
as Gambler
View All