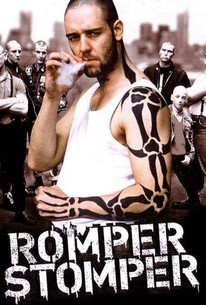 Relentlessly grim and gripping, Romper Stomper is a disquietingly authentic glimpse into the inner dynamics of a hate group, featuring an electric performance by Russell Crowe.

This controversial drama (which earned an NC-17 rating in the U.S.) was a major box-office success in its native Australia, and it made an overnight star of its leading man, Russell Crowe. Hando (Crowe) is a member of a gang of racist skinheads who lash out with violence against the growing number of Asian immigrants settling in the country. While Hando and his partner Davey (Daniel Pollock) lead a bunch of brutal, half-bright thugs, they have convinced themselves that what they do is the noble work of saving Australia for Australians (or at least the white Australians who drove the aborigines into the outback). Into this milieu comes Gabe (Jacqueline McKenzie), a troubled young woman who suffers from epilepsy and was raised in a sexually abusive environment. Gabe becomes something of a gang moll, dividing her time (and her sexual favors) between Hando and Davey, generating considerable tension between them. When the gang's favorite bar is purchased by a group of Vietnamese immigrants, Hando and Davey organize an all-out attack, little imagining that the Asians are ready and able to defend themselves. Romper Stomper was released in America in both its original, uncut form, and in an edited version that earned an R rating from the MPAA.

Daniel B. Pollack
as Davey

Neil Foster
as Skinhead in Plaster

Daniel Pollock
as Davey
View All

Watch Online: The Professional, Charlotte’s Web, Raw, and More on Netflix and Amazon Prime
View All