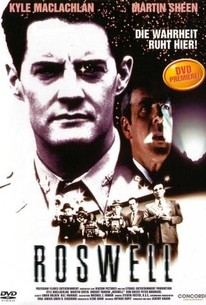 Originally made for cable television, Roswell is an entertaining mix of purported actual events and science fiction. The narrative unfolds primarily in flashbacks as retired Army officer Jesse Marcel (Kyle MacLachlan) attends a reunion of the 509th Bomber Group and tries to come to closure on events that had taken place 30 years earlier. Back in 1947, Major Marcel had been part of a military team that investigated a crash site on a ranch near Roswell, New Mexico. The debris recovered from the site had exhibited some remarkable properties such as being able to repair itself instantly after being cut, suggesting that it might have been of extraterrestrial origin. The military brass had ordered Marcel to go along with their phony story that the material was ordinary metal foil from a weather balloon, and he had reluctantly complied. By the time of the 1977 reunion, Marcel is suffering from a terminal illness, and he feels compelled to try to find out what had really happened at Roswell all those years ago. MacLachlan gives an effective performance, particularly when he portrays Marcel as an older man trying to understand his past. Evocative location shooting in the American Southwest adds cinematic impact.

Charles M. Kistler
as Interrogator No. 1

Daiton Rutowski
as Interrogator No. 2

Steve Lanza
as Outside Doctor

Arthur Kopit
as Inside Doctor

Arthur Hiller
as Scientist No. 1

Brian Carpenter
as Scientist No. 2

Frank A. Roys
as General

Will Huston
as Alien Clown at Roswell Inn

Randy Gagne
as Pilot
View All