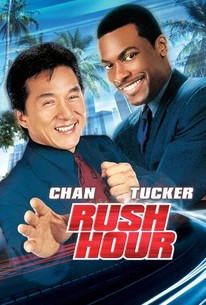 A kick-ass addition to the cop-buddy film genre.

Brett Ratner directed this action-comedy that found box-office success by teaming Chris Tucker with Jackie Chan -- performing his own stunts as per his earlier films. As the story begins, Hong-Kong supercop Lee's (Chan), detective savvy leads to the confiscation of $500 million in weapons, drugs, and Chinese art. When Hong Kong Chinese Consul Han (Tzi Ma), is sent on a diplomatic mission to Los Angeles, his 11-year-old daughter, Soo Young (Julia Hsu), is abducted by an international criminal mastermind. The FBI assures Han they will find the kidnappers and return her safely, yet Han only trusts his longtime friend and ally (also his daughter's beloved martial arts teacher) Inspector Lee, who immediately flies in to help. Unwilling to have an outsider interfere in their investigation, the FBI assigns rogue LAPD detective (and buffoon) James Carter (Chris Tucker) to the case. Hoping to impress the FBI, Carter enthusiastically reports for work but is dismayed to discover his real mission is only to keep Lee away from the case (read b-a-b-y-s-i-t-t-e-r). The arrogant Carter reacts by embarking on a one-man crusade to solve the case, but he must first distract Lee. It doesn't take Carter long before he realizes he has greatly underestimated his Hong Kong counterpart, who sees what's going on and slips away. Impatient FBI agents try to cast off these unwanted misfit cops, but with an assist from LAPD bomb expert Tania Johnson (Elizabeth Pena), Carter and Lee eventually confront the bad guys in a full-tilt action sequence. ~ Bhob Stewart, Rovi

Kai Lennox
as Cop at Diner

Jason Davis
as Kid at Theatre

Wayne A. King
as Cigaweed Man

Kevin Lowe
as Another Agent

Ada Tai
as Flight Attendant No. 2

Arlene Tai
as Flight Attendant No. 3
View All