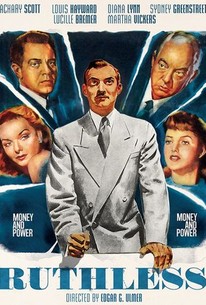 Sharkishly handsome Zachary Scott is right in his element in the Eagle-Lion melodrama Ruthless. Told in flashback, this is the story of the rise and fall of unscrupulous financier Horace Vendig (Scott). Hiding behind a veneer of respectability, Vendig steps on and rolls over anyone who stands in his way, including his lifelong friend Vic Lambdin (Louis Hayward), utilities executive Buck Mansfield (Sydney Greenstreet) and various and sundry women, among them Susan Duane (Martha Vickers) and Christine Mansfield (Lucille Bremer). Poor Diana Lynn is subjected to Vendig's cruelties twice, in the dual role of Martha Burnside and Mallory Flagg. It is a tribute to the acting skills of Zachary Scott that he makes his despicable character somehow likeable and, in the end, rather pathetic. Based on a novel by Dayton Stoddart, Ruthless, like many Eagle-Lion films of its period, was topheavy with loaned-out Warner Bros. contract players. It was also one of the few big-budgeted projects helmed by "cult" director Edgar G. Ulmer.

Robert Anderson
as Horace as a Child

Arthur Stone
as Vic as a Child

Ann Carter
as Martha as a Child

Claire Carleton
as Bella
View All