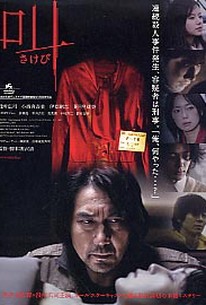 Japanese horror producer Taka Ichise -- the force behind Ringu and Ju-on: The Grudge -- and Kiyoshi Kurosawa, the director of Pulse, team up for the supernatural horror picture Retribution (aka Sakebi), starring Koji Yakusho, Riona Hazuki, Tsuyoshi Ihara, Manami Konishi, Ryo Kase, Hiroyuki Hirayama, and Jô Odagiri. Yakusho plays Yoshioka, a cop tormented by strange details surrounding the murder of a local woman (Riona Hazuki) in a red dress. Though ostensibly killed by being drowned in a shallow, tepid pool of muddy water, an autopsy reveals the woman's belly as full of seawater. Moreover, a button found at the murder scene matches one that is missing from a coat Yoshioka purchased, and fingerprints that cover the body match his own. Yoshioka thus immediately reasons that he must have killed the woman but blocked it out, despite the assurance of his colleagues that he probably just touched the body sans gloves. He is soon visited repeatedly by the apparition of the victim (red dress intact). As these visitations build in intensity and bizarreness, another drowning murder -- that of a surgeon's son -- occurs in exactly the same manner, and the evidence this time seems to point so conclusively to Yoshioka that he could be sent away at any moment. But the story is far from over. To say more would ruin the picture, but Kurosawa then springs an endless series of twists and double-crosses that force the audience to reevaluate everything that has come before. ~ Nathan Southern, Rovi