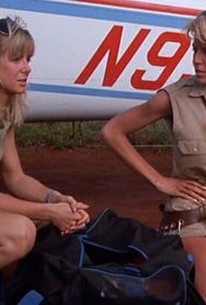 Girls, guns, and gold are the key ingredients of this action adventure drama. Donna (Dona Speir) and Taryn (Hope Marie Carlton) are a pair of beautiful D.E.A. agents working out of Hawaii. After their successful efforts in cracking a major drug ring, Donna and Taryn are recruited to deliver some badly-needed vaccine to the Philippines. However, their mission of mercy takes a sharp left turn when the agents fall into the middle of a plot by Capt. Andreas (John Aprea) to recover a fortune in gold which was stolen by the Japanese during WWII and hidden on an island off the coast of the Philippines. Leading ladies Dona Speir and Hope Marie Carlton were both centerfold models for Playboy magazine, and director Andy Sidaris gives them plenty of opportunity to display the charms that made them famous; this was their third picture together as Donna and Taryn, and while Carlton would drop out of the series after this movie, Speir would star as Donna in another four films for Sidaris.

There are no critic reviews yet for Savage Beach. Keep checking Rotten Tomatoes for updates!

There are no featured audience reviews for Savage Beach at this time.