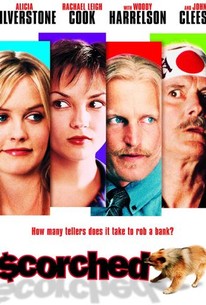 A handful of disgruntled bank employees decide to stage a robbery, but with no plans of doing it together, in this comedy. Sheila (Alicia Silverstone) is a teller at a small town bank who reaches her breaking point when her boyfriend, Rick Becker (Joshua Leonard), who also happens to be her boss, breaks up with her after three years of stringing her along, both emotionally and professionally. In order to get revenge against Rick, Sheila decides to rob the bank, but come the night of the heist, she discovers she wasn't the only person with similar plans that evening. Stuart (Paulo Costanzo) wants some adventure in his life, and plans to loot the bank vault to finance a gambling vacation in Las Vegas with his brother Max (David Krumholtz). And put-upon teller Jason (Woody Harrelson) wants to clear out the safety deposit box of foul-tempered local tycoon Charles Merchant (John Cleese), not knowing that Shmally (Rachael Leigh Cook), a clerk at a clothing store with a score to settle against Merchant, already has her own plans for dealing with him. Scorched was shot in 2001, but didn't play in American theaters until 2003, though it did enjoy a run in Europe during the interim.

Wayne Morse
as Gavin
View All

There are no critic reviews yet for Scorched. Keep checking Rotten Tomatoes for updates!