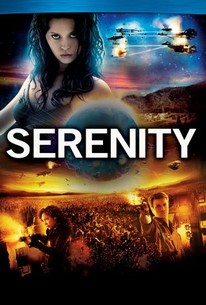 A band of renegades on the run in outer space get in more hot water than they anticipated in this sci-fi action-adventure adapted from the television series Firefly. In the 26th century, the galaxy has been colonized by a military force known as the Alliance, but its leadership has not gone unquestioned. The Alliance was once challenged by a league of rebels known as the Independents, but the Alliance emerged victorious after a brutal civil war, with the surviving Independents scattering around the galaxy. Also wandering the edges of the galaxy are the Reavers, who have won few allies due to their violent behavior and habit of ripping apart their enemies and eating them before they're dead. Capt. Malcolm "Mal" Reynolds (Nathan Fillion), who fought as an Independent in the galactic war, is the head of Serenity, a rogue frieghter ship whose crew includes Mal's first mate, Zoe (Gina Torres), who fought alongside him in the war, her husband, hotshot pilot Wash (Alan Tudyk), sunny but dependable mechanic Kaylee (Jewel Staite), and hard-nosed gunman Jayne (Adam Baldwin). The crew of Serenity wander the galaxy, taking on whatever work they can get, from criminal activities like smuggling and stealing to legitimately offering transport to travelers. Passengers aboard Serenity include professional "companion" Inara (Morena Baccarin) and holy man Shepherd Book (Ron Glass), but the real trouble aboard the ship comes with the arrival of Simon (Sean Maher) and his teenage sister, River Tam (Summer Glau). In time, the crew discovers that River has remarkable psychic powers and was being held captive by Alliance forces until Simon came to her rescue. Now the Alliance is hot on the heels of Serenity and its passengers, with The Operative (Chiwetel Ejiofor), a sinister Alliance tracker, leading the chase. Serenity was written and directed by Joss Whedon (in his directorial debut), creator of Firefly, which only lasted 11 weeks on the air but gained a powerful cult following who rallied to get the show released on DVD after its cancellation, leading to impressive home-video sales and and an eventual motion picture deal. A couple of months prior to Serenity's theatrical release, reruns of Firefly were picked up by the Sci-Fi channel, adding even more fans to its cult following. ~ Mark Deming, Rovi

Chiwetel Ejiofor
as The Operative

Weston I. Nathanson
as Trade Agent