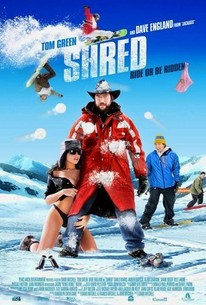 Two washed-up snowboarders hatch an ingenious scheme to restore their reputations and get back on top of the snowboarding scene in this chilly comedy starring Tom Green and Dave England. Back in the 1990s, you couldn't pick up an extreme sports magazine without seeing glossy pictures of Max (England) and Eddie shredding it up on the snowy half-pipe. But these days things are different; a decade of reckless behavior has left them terminally hung over and hopelessly off-balance. Max and Eddie now work as lift operators at Stubby Peaks ski hill, and they hate their lives. Realizing that the only way to regain their status as kings of the hill is to take the top prize at the upcoming snowboarding event, the two longtime pals decide to form the ultimate snowboard team. But their old arch-nemesis Kingsley Brown (Green) is now the head of the National Snowboard Association, and he's seen the chaos these two boozy buddies are capable of causing. In order to keep Max and Eddie out of the sport for good, he blackballs their camp with all of his power. The big event is coming up fast, and if they don't form a team before it's too late, Max and Eddie might just miss their last shot at true redemption. ~ Jason Buchanan, Rovi

There are no critic reviews yet for Shred. Keep checking Rotten Tomatoes for updates!