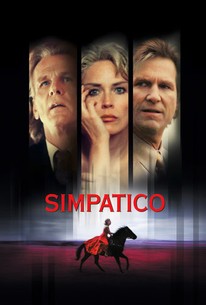 Critics say Simpatico's lengthy plot is too unfocused; the movie becomes confusing and tedious to watch.

Old rivalries lead to new betrayals in this Sam Shepard drama with comic undertones. Vinnie (Nick Nolte) and Carter (Jeff Bridges) have known each other for years, but their relationship has grown less than cordial. Many years ago, the two men, along with Vinnie's girlfriend Rosie (Sharon Stone), were making good money in a con game at a racetrack until Simms (Albert Finney), the local racing official, got wind of their ruse. Vinnie and Carter hatched a blackmail scheme that ended Simms' career and ruined his life. Years later, Vinnie is an alcoholic low-life who still makes a living from blackmail; Carter is now a successful horse breeder, married to Rosie, and Vinnie has incriminating information about him that he uses to get Carter to pay his living expenses. Carter gets a call from Vinnie one night as he's finalizing the sale of his prize-winning stallion Simpatico; Vinnie is in jail on a morals charge regarding a woman he's been seeing named Cecilia (Catherine Keener). Vinnie makes Carter an offer: if he comes to California to help him out of this mess, he'll hand off the documents that he's been using against him for years. Carter agrees, but when he arrives, it turns out that Vinnie's not in jail, Cecilia has filed no charges against him, and this is just part of a larger scam with Carter as its target. Director Matthew Warchus made his screen debut with this film; he also adapted the screenplay (in collaboration with David Nicholls) from the play by Sam Shepard.

There are no featured audience reviews for Simpatico at this time.